Join us as we celebrate Sydney’s annual festival of Light, Music, and Ideas at Vivid Sydney 2023

A bit about Sydney Vivid Festival

Vivid Sydney 2023 is the largest festival of light, music, and ideas, in the Southern Hemisphere. From Friday 26th May to Saturday 17th June 2023 the city’s iconic buildings will be bathed in light and sound.

Vivid Sydney is an annual festival that sparks the soul of our city with creative brilliance for 23 days and nights. Celebrating its 13th year in 2023, Vivid Sydney fuses art, innovation and technology in collaboration with some of the most boundary-pushing artists, thinkers and musicians of our time. Vivid Sydney tells a story of the harbour city beyond the icons, about urban legends, secret spaces and visions for the future. The 2023 light festival boasts the longest continuous Light Walk in the history of the event, from Sydney Opera House to Central Station. Once again, the Sydney Opera House will be aglow for the Lighting of the Sails, and at a new Light Walk addition, Central Station, the George Street façade will boast an interactive projection.

All best viewed from the water.

Experience Vivid Sydney and see the city’s iconic landmarks be bathed in light and sound from the water. Aboard a Luxury Glass boat or modern catamaran, take in the dazzling view of the festival’s major precincts including the Sydney Opera House, Circular Quay, The Sydney Harbour Bridge Light Show and the entire city skyline.

Witness as the evening show transforms skyscrapers and heritage sites into an amazing colourful canvas.

The Sydney Vivid Cruise showcases Vivid’s dazzling nightly displays from Sydney Harbour from the best vantage point from the Bella Vista Glass boat*. Taking in Vivid’s major precincts including the Sydney Opera House, Circular Quay, Taronga Zoo, The Sydney Harbour Bridge Light show and the entire city skyline where the nightly shows transform skyscrapers and heritage sites at night into an amazing colourful canvas.
Vivid not only brings creative minds together in Sydney to connect with global leaders in the creative industries but it brings Australian’s together to share in a winter wonderland every year.

* vessel subject to change without notice.

Vivid Sydney, now in its 13th year, is a 23-day festival of light, music & ideas - is the largest festival of its kind in the world.

Vivid Sydney is owned, managed & produced by Destination NSW, the Government’s tourism & major events agency.
Vivid Sydney celebrates creativity and innovation and showcases the magic that can be created when art and technology meet. The program features large scale light installations and projections (Vivid Light); music performances and collaborations (Vivid Music including Vivid LIVE at the Sydney Opera House); and creative ideas, discussion and debate (Vivid Ideas). All three celebrate Sydney as the creative hub of the Asia-Pacific.
Vivid Sydney was recently by the International Festivals & Events Association (IFEA) and received 13 accolades at the 2017 IFEA Pinnacle Awards. Vivid Sydney Australia’s Best Event in 2013 and Best Tourism Event in 2013, 2014 and 2015 and Australia’s Best Tourism Event and Best Cultural, Arts or Music Event in 2017. 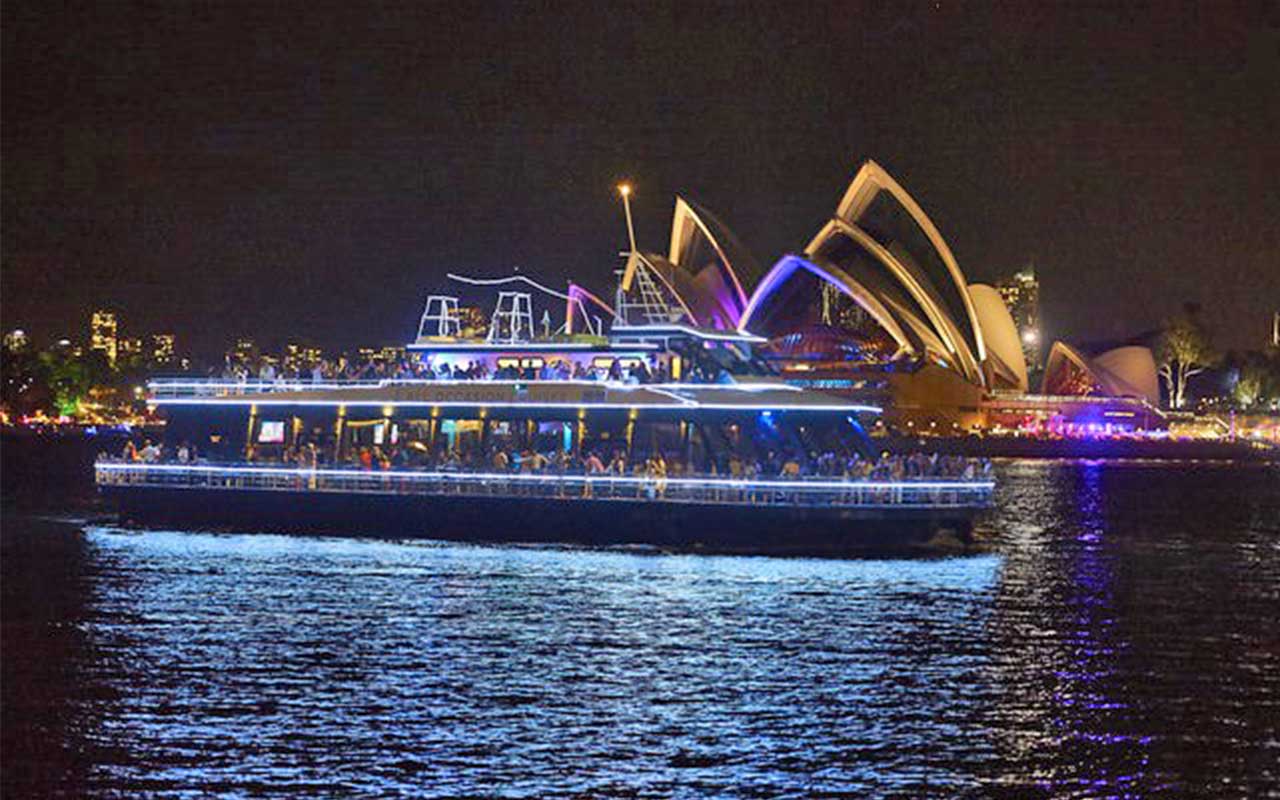 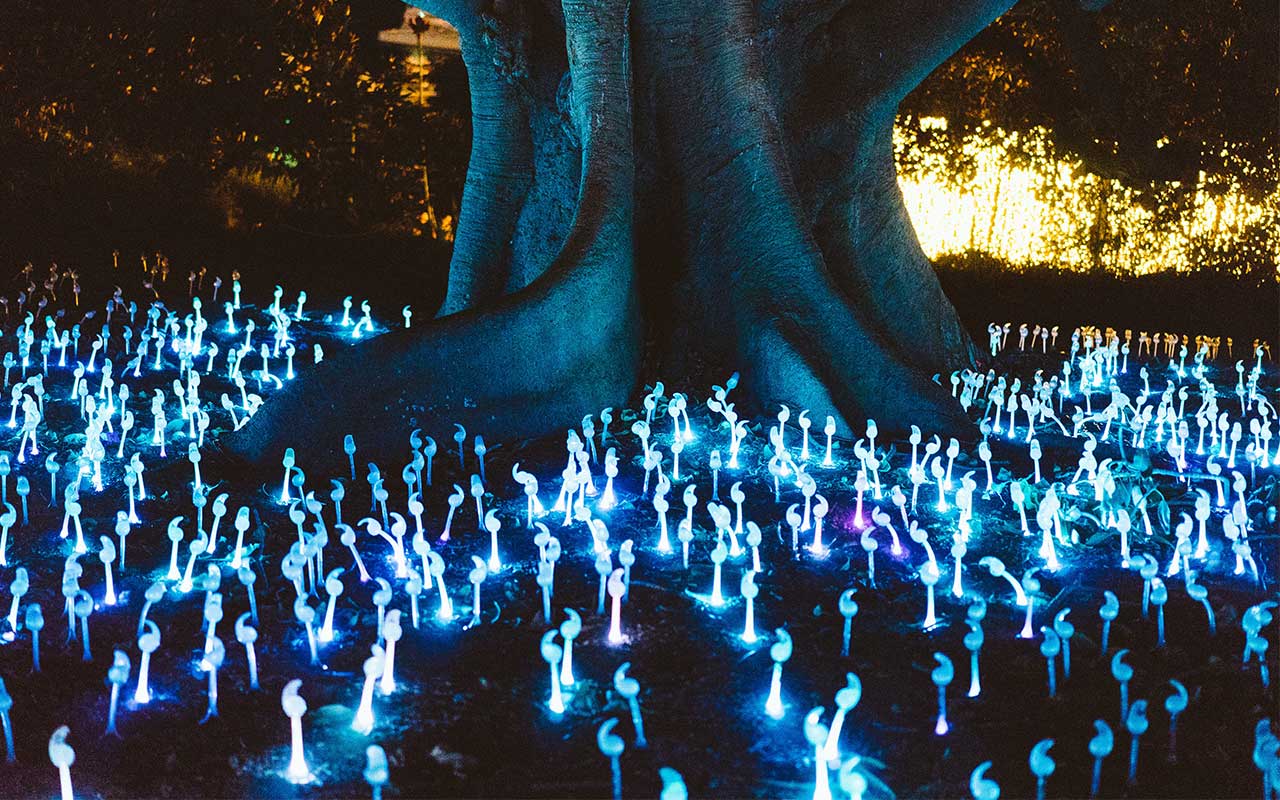 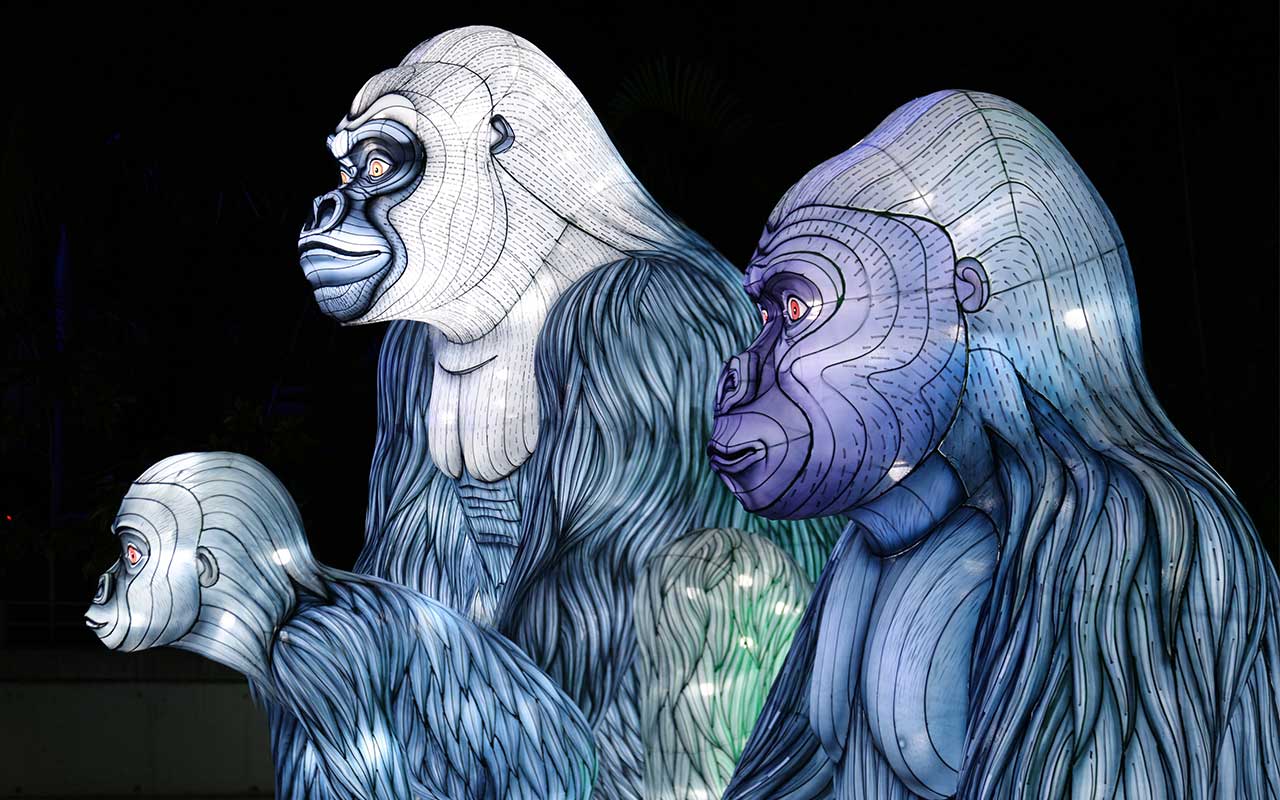 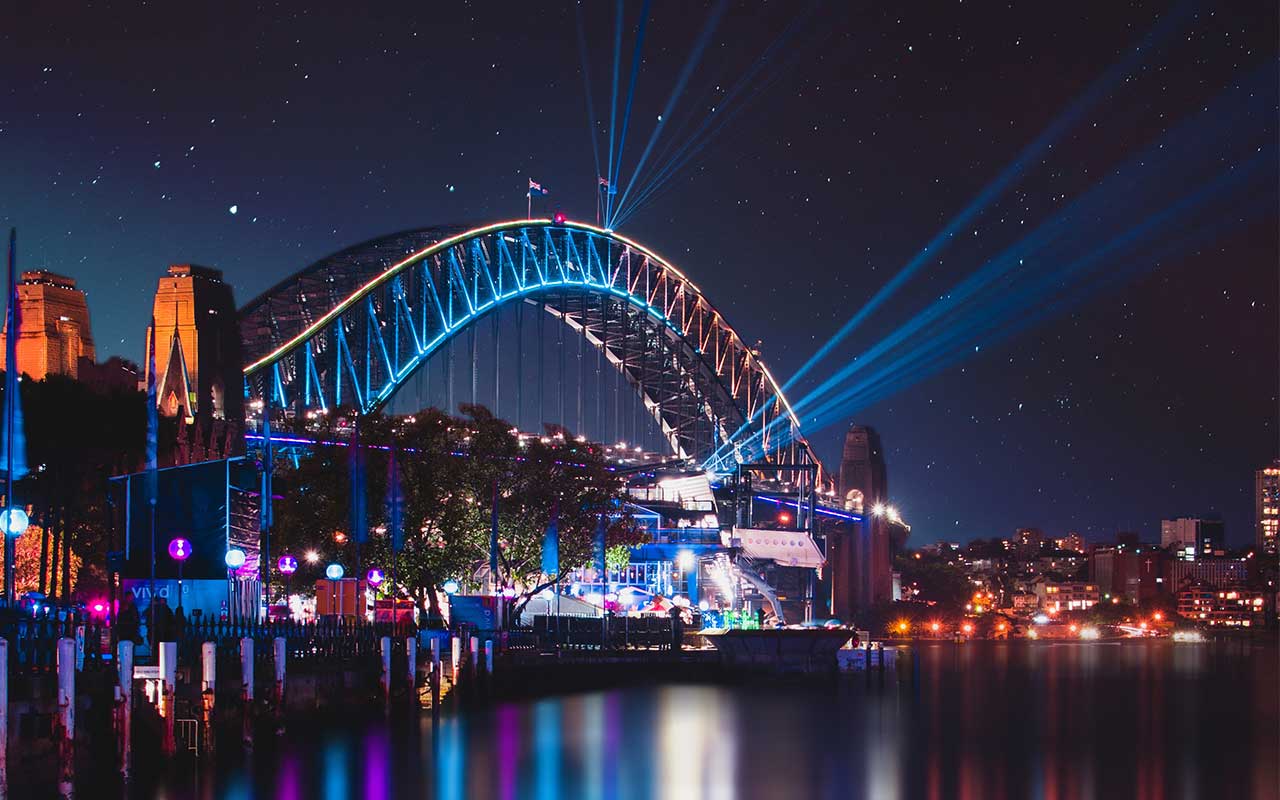 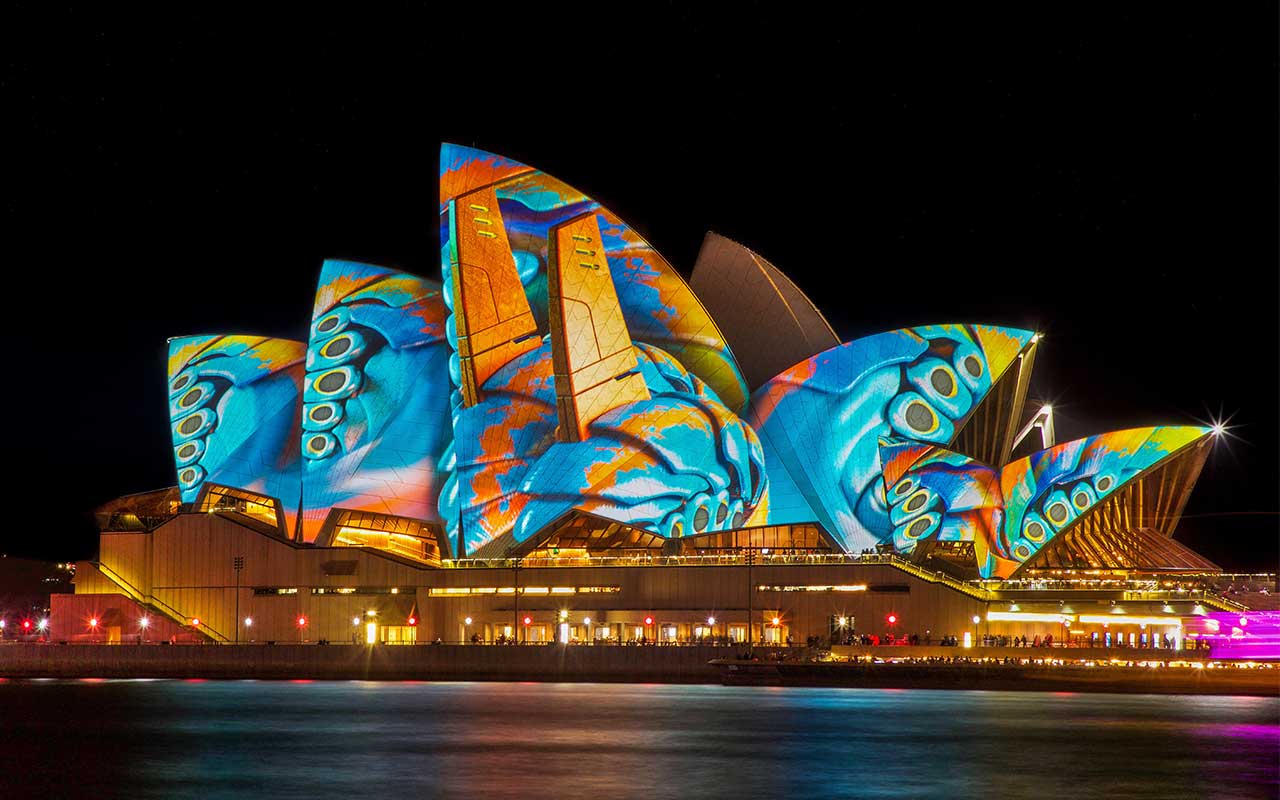 A unique Vivid Sydney experience this 2023.

Vivid Sydney features many of the world’s most important creative industry forums, a mesmerising free public exhibition of outdoor lighting sculptures and installations and a cutting-edge contemporary music program.
Vivid Sydney is where art, technology, and commerce intersect.
Vivid Light transforms Sydney into a wonderland of light art sculptures, innovative light installations and grand-scale projections for all to enjoy. It is a magical celebration of light-design excellence and the world’s largest outdoor art gallery. A unique Vivid Sydney experience.
Vivid Light engages lighting artists, designers, and manufacturers from around Australia and the world to illuminate interpret and transform Sydney’s urban spaces through their creative vision.

Be part of the action and excitement as Sydney comes to life with this amazing light festival. Your ticket with Vivid Sydney Cruises gives you the best view of the harbour and surrounds as you cruise past the Sydney Opera House and Harbour Bridge. Avoid the crowds and enjoy a relaxed cruise with your friends and family onboard the Bella Vista as you dine in comfort, and watch the lights from your waterfront seats. Contact Us Now to Book! CALL: 0400 257 005

*All images used are from previous vivid festivals and may not be on display this year.